This event has already taken place! Please make sure you are in the correct year. ×
Apr
18
Thursday
Apr
18
Thu 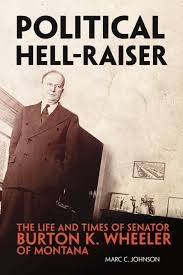 Join us for a presentation and book-signing by Marc C. Johnson, author of Political Hell-Raiser. The Life and Times of Senator Burton K. Wheeler of Montana. Wheeler may have been the most powerful politician Montana ever produced, and he was one of the most influential—and controversial—members of the United States Senate during three of the most eventful decades in American history. A New Deal Democrat and lifelong opponent of concentrated power—whether economic, military, or executive—he consistently acted with a righteous personal and political independence that has all but disappeared from the public sphere. Recently published by the University of Oklahoma Press, Political Hell-Raiser is the first book to tell the full story of Wheeler, a genuine maverick whose successes and failures were woven into the political fabric of twentieth-century America.
Advertisement
Links: http://mhs.mt.gov/