This event has already taken place! Please make sure you are in the correct year. ×
May
15
Wednesday
May
15
Wed 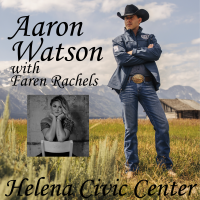 Aaron Watson continues to dominate as a true independent in the country music arena. Wrapping a milestone 2017 that included headlining stops at Houston Rodeo and historic Ryman Auditorium, the Texas troubadour’s single “Outta Style” hit Top 10 on Billboard’s Country Airplay Chart after a record-breaking 50-week climb, Watson continues his nationwide tour in support of his highly acclaimed album, Vaquero, with a slew of 2018 dates, highlighted by a hometown arena show in Abilene, a Texas Independence Day show in New York City, and Stagecoach in Indio. Watson’s newest release Vaquero launched into the Top 10 on the Billboard 200 Albums chart with his biggest career sales debut to date. Texas Monthly, Billboard, Rolling Stone Country, Noisey, CMT, The Boot and more have all praised the new music. Vaquero is the follow up to his history-making album The Underdog, which debuted at #1 on the Billboard Top Country Albums chart, making him the first-ever independent, male country artist to debut in the coveted top spot. Watson’s rise has been paved by years of hard work and perseverance. Eighteen years, over a dozen recorded albums and more than 2,500 shows in the U.S. and Europe, the Texas native is determined to stay true to his roots and deliver music directly to his fans. Watson shared his journey with fans via a video that has racked up over 7.2 Million views and 50,000 shares.
Get Tickets
Advertisement
Links:
http://www.helenaciviccenter.com
http://www.helenaciviccenter.com