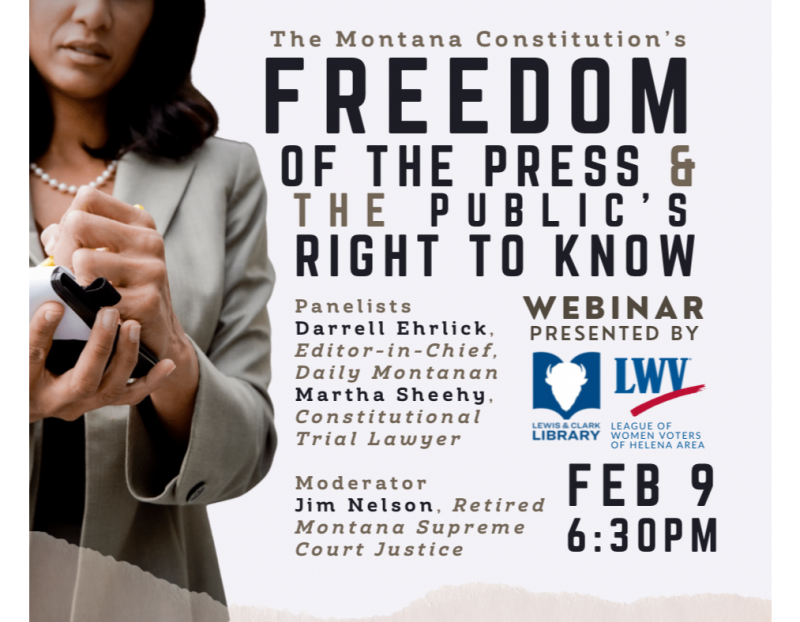 Freedom of the Press and the Public’s Right to Know – focus of LWV webinar Feb. 9

“Freedom of the Press and the Public’s Right to Know Under the Montana Constitution” is the title of a webinar at 6:30 p.m. Thursday, Feb. 9.

Co-sponsored by the Montana League of Women Voters of the Helena Area and Lewis & Clark Library, this webinar is part of a series of LWV programs on the Montana Constitution.

"The right to know guarantees that citizens have access to all governmental decision-making," Sheehy adds. "People need to know how to exercise that right."

“Because we stand in the public’s shoes,” says Ehrlick, who has been a party in a number of these lawsuits, ”our fight is your fight. You should know what the press is doing on your behalf because these are your public officials.”

The webinar will provide the public a strong sense of what may be at stake in the 2023 Legislature and the actions needed to protect these rights.

Ehrlick is the former editor of The Billings Gazette, which took Montana’s top newspaper award six times in seven years during his tenure.

During her 35-year career, Sheehy has represented media interests and private citizens in enforcing Montana's constitutional right to know in dozens of cases. Her uncle was a delegate to the 1972 Constitutional Convention.

Nelson, served on the Montana Supreme Court from 1993 to 2013 and is a former Glacier County Attorney and prosecutor.